The Hands of Time

Home/Articles by Mitch/The Hands of Time

The Hands of Time

What does the clock say, Bapa?” asked my granddaughter Aryela for the third time in the last minute.

“It says 4:42, honey.” We were dyeing eggs, and the instructions said to let them soak for seven minutes. We were one minute in, and the hands of time couldn’t move fast enough for this darling 2½-year-old. “When the clock says 4:48, the eggs will be ready,” I told her. She asked me another 15 times, “What does the clock say, Bapa?” until we reached the magical moment of 4:48.

It became a long-standing joke in our home that anytime we were in the kitchen together she would ask me, “What does the clock say, Bapa?” I would then tell her the actual time, and she would shake her head and say, “No, Bapa, it’s 4:48.” 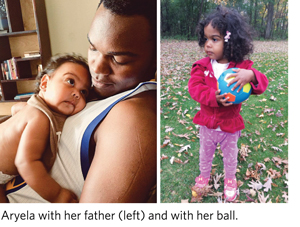 Time had been moving very slowly for this little princess and her mother (my daughter, Sophia) as Aryela had been waiting for over two years to see her father again. The emotional toll that the immigration process can take on a young family was something we all experienced firsthand. On the advice of our immigration lawyer, my daughter and granddaughter had moved back home from Uganda as their daddy/husband went through the process of getting a permanent resident card. The lawyer informed us the odds were much better with them being here first. It made even more sense because my daughter was experiencing some serious health issues at the time.

Things dragged on from September 2018 until October 2020. Adding to the delay were an agonizing confluence of bureaucratic neglect, restrictions on making e-mail contact with the embassy, case workers losing records and inexplicable delays, along with the ongoing pandemic. My daughter and her husband were hanging on to the thinnest thread of hope that anything was going to happen anytime soon. Meanwhile, Aryela began to ask Mama daily, “When is Daddy coming?” For the last two years she had only experienced him on the phone—and thank goodness for that.

My daughter, desperate for some indication from the embassy that progress was being made, asked me if I thought it was a good idea to send an e-mail, even though the embassy instructed applicants not to initiate contact with them. I thought about it for a while and then suggested she send one with the subject header of “Missing Daddy,” and include photos both of her as a baby girl (the last time her father held her) and as a toddler today, along with a short note. Here is what she wrote:

To whom it may concern,
Our daughter has been asking for her daddy every day. I wish I knew what to tell her. Christmas is coming, and I fear this will be the third one in a row without her father.
This month marks two years since he has held his daughter. Can you give us any indication of hope? Thank you for your consideration.  —Sophia Anthony

Within a couple of days there was a response from the embassy indicating that the process was being stirred into the final stages. I guess the old adage that a picture is worth a thousand words has some merit after all. A case worker’s eyes and heart were moved to action. In a few weeks, Daddy would be coming home on the airplane—and as it turned out, in a plot twist that only Frank Capra could dream up—he was arriving on Thanksgiving Day.

The day couldn’t come soon enough after 25 months of separation. What a joyous ride to the airport we had. Aryela was dressed up like a real princess, and Mama was beside herself with anticipatory glee. His flight was due to arrive in Minneapolis just after 5 in the evening. We told this to Aryela, who by now had a fixation on the current time.

I’ve taken the time to share this with all of you faithful readers because I’d like for all of you to share in some of our joy. Click the link below to see the most beautiful 60 seconds anyone could ever imagine: (vimeo.com/491738834).

On the heels of a year that has taxed all of our patience, perseverance and forbearance, it never hurts to have a reminder that even though the hands of time rarely move at the pace we wish, we can still have faith in the divine hands that move time … 4:48 is now indelibly imprinted in the hearts of the Anthony family.

Mitch Anthony is the creator of Life-Centered Planning, the author of 12 books for advisors, and the co-founder of ROLadvisor.com and LifeCentered Planners.com.